Back in 2011, when the pain started in my left hip, and then moved to my right hip, I was concerned. I could barely walk, and with each step accompanied by distressing pain, I was forced to sit still for a good portion of my days.

When it spread to my right shoulder, leaving me unable to lift or use my right arm, I was terrified. I couldn't wave. I couldn't throw. I couldn't lift my children. My youngest wasn't even a year old at the time. I couldn't hug them with both arms.

I was living with broken hips and a broken shoulder, but they were not going to heal on their own as most broken bones do.

There was a larger problem that my doctors could not [and still cannot] figure out. I was clotting severely, so much so that the blood wasn't reaching my bones, and my bones were dying. I was also dealing with autoimmunity for the first time in life, and was diagnosed with Sjogren's Syndrome. In a matter of months, I went from a nearly perfect health profile to an absolutely scary one.

I was telling my doctors what I believed the cause was [the Mirena IUD, which was inserted about 6 months earlier], but they refused to acknowledge that because there are no studies to back it up [not because studies disprove this, but because they don't exist - help me to change that HERE]. Although I wasn't even considering a lawsuit at the time, perhaps they feared I would involve them in a legal battle. I saw just about every type of doctor you could imagine. I had countless tubes of blood drawn. But still, they concluded my case as idiopathic, meaning no known cause.

It was a dark time for me, because I never felt more at odds with myself or the professionals I trusted with my care. My well-being.

I tapped into my faith like never before. I gave it all to God. It was beyond my control.

For the first time in a long time, perhaps forever, I let faith alone guide my decisions.

I had the Mirena IUD removed, and the Avascular Necrosis never spread to my left shoulder, which was unique compared to most cases of Avascular Necrosis that quickly progress from one side to the next [like it did in my hips]. I started scheduling corrective surgeries, one right after the other, every 6 weeks for about 6 months. I needed to get back on my feet. I needed to lift my arm again. I had core decompressions surgeries on both hips and my shoulder. When my left hip collapsed, I had it replaced. Both hips have proved to be too damaged to benefit from core decompression surgery, meaning my right hip will also need to be replaced soon.

But in my shoulder, which was the final joint to become affected, I saw steady improvement. During physical therapy sessions, I could raise my right arm a little higher each time. I could lift things that were a little heavier.

Through all of this, I continued to lean on God. I prayed for healing, patience, understanding. I asked for His continuous guidance.

After six months of being in a wheelchair and heavily relying on aides, I took my first independent steps into my church on a Sunday in August of 2012. Instead of sitting in the back of worship in a wheelchair, I was finally walking up the aisle when the band began to play the most fitting of songs, Never Once. It was a powerful moment, and I felt the Lord's presence perhaps more prominently than ever before.

About a year and half later, I started training as a sound technician during the worship services. During my first night of training the band played Never Once. I smiled inconspicuously, knowing that I was in the right place. On the right path. I faithfully listened, and here I was.

Last week, my husband and I were invited to lead worship in a choir-of-sorts from the stage. I wanted to put it all out there, to lift my arms to Him, and show Him praise. 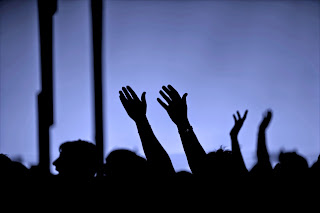 The night before I wasn't sure if my right shoulder would cooperate. I knew it was drastically improved. But I still can't throw. I have limited mobility and strength. Even at rehearsal earlier in the week, I didn't even attempt to lift my right arm, fearing it wouldn't make it in the air.

That Saturday night, I prayed again. I reflected on how far I'd come and how many of my past prayers had been answered. I even expressed in prayer that I'd already received more than enough of His grace — more than I felt I deserved.

The next morning at church, it became apparent that God wasn't done with me yet. Without pain through three consecutive songs, and for two back-to-back services, my arms were lifted. Both of them. During the services, I relied on God. And I gained the confidence to once again rely on my right shoulder.

Perhaps that ability had been there, and I just didn't know it. Lately, I'd been too comfortable. I was starting to settle. I was returning to making decisions that weren't guided by faith. While I wasn't completely out of the darkness I'd once experienced, I was certainly enjoying the light. And I was beginning to take that for granted.

If I could seek His constant guidance through the darkness, I needed to praise Him and continue to seek Him as I stood in the light.

Though I still seek answers to questions about my health, I've learned to focus more on the answers I've already received.

I do not lift my arms to Him simply because I can. I lift them with purpose — the purpose He gives me.