Oh, how my heart aches thinking about all the unexpected aches that more women will experience from Bayer's newest contraception, which appears to be Mirena, Jr.

The FDA recently approved a new IUD, manufactured by Bayer. It's called Skyla.

It's a pretty name. Sounds harmless. The name Skyla is Dutch in origin. It means scholar, or shield of knowledge.

So, for name's sake -- let's shield ourselves with some knowledge.

"The [Skyla] reservoir is covered by a semi-opaque silicone membrane, composed of polydimethylsiloxane and colloidal silica." [SOURCE: http://www.rxlist.com/skyla-drug.htm]

Same as Mirena, Skyla uses silicone, which is known to cause autoimmune issues that will cause your body to attack itself. The result of that can only be left to the imagination. It can affect your body in countless ways and possibly cause permanent damage, including lifelong autoimmune disease. In my case, I was diagnosed with Sjogren's Syndrome (an autoimmune disease) after using Mirena.

Also like Mirena, the active ingredient in Skyla is levonergestrel (or LNG), which is a hormone (a second generation synthetic progestogen). It's no secret that hormones are linked to an increase in clotting. But in my opinion, it is not something that is discussed enough.

Just six months after having Mirena inserted, clotting caused me to develop Avascular Necrosis (bone deteroriation due to lack of blood supply) in my hips and shoulder. You can read MY STORY to learn more about the serious effects AVN has had, and still has, on my life.

The difference between Skyla and Mirena is that Skyla is intended to release 13.5 mg of LNG, while Mirena intends to release 52 mg of LNG. Skyla seems the better option, having less hormones involved. Though, I would never go out far enough on a limb to suggest to any woman that a hormonal contraception is a good choice.

In my opinion, the daily release amounts of LNG cannot be trusted. One study I previously shared showed that women with low body weight or high SHBG (Sex hormone-binding globulin) levels, increased amounts of LNG were released. That same study shared that, in these cases, the LNG could also become systemic (meaning that it affects the entire body, and not just the uterus, as it is intended to do).

Skyla, unlike Mirena, is being marketed to women who have not had children. It is also marketed as a 3-year IUD, whereas Mirena is marketed as a 5-year IUD.

As I've stated before in my blog, I am not a doctor. I only wish for women to educate themselves about the harmful possibilities that could affect them. I always advise women to take a close look at their family medical history. Based on my experience and research, if autoimmune disease or clotting is a your in family health profile, I would suggest avoiding Mirena and Skyla altogether. There are other warnings provided by Bayer -- please read those also.

If you are able to explore other options for birth control, I'd suggest staying away from synthetic hormones. They are not good, natural hormones.

Above all, make an educated choice. I did not, and because of that, my health profile went from nearly perfect to just plain scary.

Don't be fooled by a pretty name. It's what's on the inside that counts. 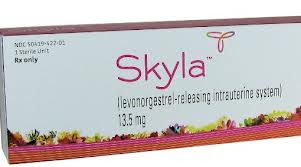