Mirena: Writings on the Wall

I have done a ton of online research about the links between Mirena, silicone and autoimmune diseases and I intend to hit the books soon. I'm amazed at some of the information that I have come across on the web. Some of that information comes directly from the FDA and Bayer (the maker of Mirena) websites. I have saved page upon page of information that only fuels the idea that my quickly deteriorated health is a result of Mirena. 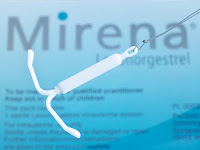 Of course, there was always the obvious -- the symptoms (debilitating hip and shoulder pain) began about 4 months after I had Mirena inserted. And when I had it removed in November the bone deterioration halted. Both hips and my right shoulder were already affected, but upon removal, my left shoulder didn't deteriorate. It was starting to, as an MRI revealed. But it seemed that my blood flow had all of sudden restored itself after Mirena was removed. My left shoulder was saved.

Could that have been a coincidence? Sure. Seemed unlikely, but it could have been. Even through today, I've tried to keep an open mind about things. But as I read more, my mind starts to close in a bit.

Here is some information that I want to share (I'll share more at later a date - in an effort not to overload you or myself):

This is a clear warning that should be provided to women who are between 82.5 - 121 pounds and are interested in using Mirena as birth control. Low body weight is shown to "affect systemic LNG concentration." Mirena is promoted as a "remote" concentration -- meaning that it only affects a SINGLE area of the body (the cervix). But this clearly says "systemic," which means the ENTIRE body. "LNG concentration" is the amount of levonorgestrel (LNG) released by Mirena. And the excerpt from above clearly states that the concentration is 1.5 times higher in women who weigh less than 121 pounds.

Why wasn't I, as a women within this "low body weight, reproductive age" range, not warned that the LNG could possibly spread throughout my ENTIRE body OR that the levels of LNG being released would be 1.5-fold HIGHER? Women who fall into this category need to be told this BEFORE Mirena is inserted. This information should be made known by Bayer, the FDA and the doctors who support it and provide it to their patients.

FYI - Levonorgestrel was also the active ingredient in Norplant and Norplant II (Norplant distribution in the US ended in 2002 and it resulted in more than 50,000 lawsuits, including 70 class actions. Norplant II has never been promoted in the US)

Mirena works as a birth control because the LNG, which is released daily into the uterine cavity, thickens the cervical mucus and inhibits sperm motility and function.

But if it the concentration is systemic instead of remote, could that mean that the uterine cavity wouldn't be the only place where thickening would occur? Perhaps the blood in my arteries and veins have thickened, causing blood clotting ... which causes Avascular Necrosis.

I've seen where many women have reported difficulty breathing. And others, including myself, experienced heart palpitations. Are we "thickening" in all the wrong places?

And perhaps there is some silicone mixed in with what is being released. Is silicone roaming all around my body causing autoimmune issues? I've previously shared that many women who use Mirena have developed autoimmune symptoms and diseases. I shared a video that I found on "My Life After Mirena" here. I have also discussed some of the links between Mirena and my own autoimmune issues here.

I'm having a hard time understanding this. Is this reservoir a tiny medical genius? How does it know to release LNG and not silicone? It's already been shared that the daily release amount of LNG differs in body types and at different ages and for women with high SHBG levels. And it was also shared that it could become systemic and not remote. My guess is that this contraption is far from genius. In fact, it seems to be getting it all wrong for many of us.

I've virtually connected with hundreds of women who have had bad experiences with Mirena. Some will never be able to have children again (since Mirena is recommended to women who already have at least one child). Some fight off horrible autoimmune symptoms every day of their life. Some have isolated themselves, because no one seems to care what is happening to them and they aren't receiving proper care. Some, like me, will have to have surgery in an attempt to restore their bodies back to normal.

I am not a doctor. I have no interest in becoming one. I may not have credentials, but I do have a brain. Sometimes, all you have to do is read between the lines. This is where we need doctors to step in. Do some actual research and report ALL of your findings. Provide some proof. I'm a willing test participant! Step out of the box and listen to your patients. Stop listening to companies who need you to push their product. Make a difference.

If you have had a bad experience with Mirena, or any other drug, I urge you to share that information with the FDA through MedWatch, the FDA Safety Information and Adverse Event Reporting Program @ http://www.fda.gov/Safety/MedWatch/default.htm

They will never know what is happening to us if we don't report it. I have no idea what they actually do with it when they receive it, but I have shared this information with them in the hopes that they would make Mirena provide this warning (among others). I'd like to believe that they actually read the reports and that they take their jobs seriously. (sigh)