I graduated college on a Friday in June of 2002. That following Monday, I did what everyone else in my family (five generations back to be exact) had done. I got a job at the local shipyard. I was a young mother at the time — my son was almost two years old, which meant there was no time for a graduation trip or time off before entering the "real world."

Twelve years had passed, and I still hadn't managed to take a full week off of work.

So much had changed from then to now. I got divorced. I got a new job. I got remarried. I had two more children. I had four surgeries. Since I was only actually paid for four weeks of maternity leave (but needed six), and I chose not to take disability leave after my surgeries (using vacation instead). I struggled to accrue enough time off for any type of extended vacation.

But this month, that changed.

We finally did it. Our family of five managed a vacation that lasted nine whole days.

About a month prior, I had a cortisone injection in my hip joint. I'd hoped it would last, but it didn't. Still, despite the pain, I went. I was beyond determined to make this trip happen. I needed it. We all needed it.

We started planning at the start of the new year. We even made an agenda for our trip, which was really more of an outline of options than a 'must-do' list. 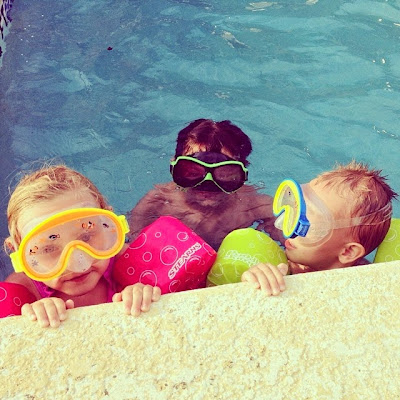 I stared at the agenda, updating it constantly right up until the day before we left, and daydreaming about how some it would play out.

Two days of driving. Three days with my best friend and her family. Several days at the resort, swimming and doing other activities. One day at Downtown Disney. One day at LegoLand. And one very full day at the Magic Kingdom at Walt Disney World.

On the road, the kids (ages 3, 5 and 13) cooperated much better than anticipated, with no major meltdowns along the way. Spending time with my best friend and her family was instant Chicken Soup for my Soul.

The Magic Kingdom was as magical as I remembered it as a child, and if you are interested, I go into [a lot] more detail about that day in another post: The Magic Kingdom in One Day (with toddlers).

I can safely say that it was far better than any daydream I conjured up.

I didn't daydream the moment when my daughter, who was dressed as Cinderella, got Cinderella's autograph in her book, and walked away hugging the book to her heart while letting out a happy sigh that brought tears to my eyes. That was real.

I didn't daydream my youngest son constantly climbing up and zipping down the water slide at LegoLand with a boisterous laughter that seemed to be volumes above the dozens of other children playing in the area. That was real.

I didn't daydream my oldest son grabbing for my hand in public as we walked from the arcade to the ice cream parlor. That's something he hasn't done in years, but something I sorely missed. That was real.

I didn't daydream my daughter practicing a song she titled, "I love you," before performing it for my oldest son. Or how she would learn to swim all by herself for the first time. Or how our youngest would do 180s from the side of the pool, only taking breaks to eat watermelon or to hug his [stuffed] baby lion. Or how my husband and I could do more laughing than stressing, and talk about things other than what we needed to accomplish the next day and who needed to take the kids where at what time.

We all only needed to be with each other. Having fun. Spending undistracted time together. Making unforgettable memories. And even relaxing some.

I'm so glad I didn't let my pain hold me back.

Long vacations may not have been a thing of my past, but they are certainly a thing of our future.