The Bow in Her Hair

At a young age, bows made me cringe. Especially pink bows. They were so girly. More girly than I ever wanted to be.

More than twenty years later, the good Lord decided to teach me lesson. He gave me a daughter.

During pregnancy, I was sicker than I ever was with her older brother. I was told many times that my morning, afternoon, night and every moment in-between sickness was because it was going to be a girl. I heard it so much that I would've been shocked if it turned out to be a boy.

The time came to find out the gender. I laid on the table as the ultrasound tech slapped thick, cold goo on my belly and rubbed it around with a device as images of our baby appeared on a screen.

"It's a girl!" she said as my husband and I smiled at the expected outcome.

We were both excited that it was a her. We just didn't know what to expect. My husband has three brothers. I have one brother. We had a son. 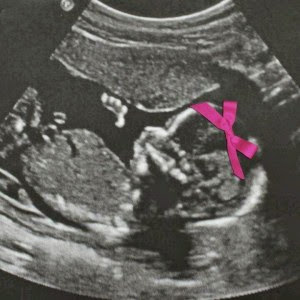 "What would I do with a daughter?" I thought.

And then, I had an epiphany. I would have a girl, but not a girly-girl. I was so serious about this that I specifically noted on the baby shower invitations that "colors other than pink are preferred."

That was so silly of me, right?

But either no one saw my pink protest, or they chose to ignore it. She was showered with pink tutus, pink hair bows, frilly pink socks and pink onesies with sparkles and ruffles.

Not long before she was born, I packed several outfit options for her in my hospital bag. I decided I needed to meet her first before choosing which one would be "the one." After all, it was her "Here I am, world!" outfit.

Her entrance caused a bit of panic, because no one was ready for her. She was born on the fourth of July, and there was one nurse who didn't seem to believe how far along I was in the labor process — until our daughter was actually on her way out. I still hadn't seen an anesthesiologist, and my OBGYN hadn't arrived yet. I'm pretty sure everyone was enjoying fireworks with their families.

Luckily, my doctor arrived just in the knick of time. When I held her for the first time, I could not believe how beautiful she was. Every time I looked at her, more disbelief set in. We spent a few days bonding in the hospital and it was apparent that she already had a personality. She demanded attention, but she did it in the sweetest ways possible — through silly sounds or funny movements. When she smiled, the world smiled with her. And I've always felt like that was her purpose for smiling.

It was our last day in the hospital before taking her to her home for the first time. I laid out the outfits I'd packed: a yellow dress, a blue and white floral print dress and a white and pink onesie with a few layers of ruffles on it. To my own surprise, I chose the white and pink ruffled onesie. And to top things off, I put a tiny pink bow in her barely-there blonde locks.

She was absolute perfection.

By time she reached Pre-K, she was getting picky about her outfits. They had to be dresses, and most of the time, they needed to be pink. She'd request a matching bow or headband to go with each one as she would look into the mirror and say, "Isn't this a beautiful outfit, mommy?"

Of course, they were.

She lives in a bright pink room with pink and white curtains. She wears tiaras like they are an extension of her head. She tells fifty percent of the people she meets that pink is her favorite color.

All of this, despite my attempt at a pink protest.

Now, as a kindergartener, bows remain a necessary accessory. Especially pink bows. But somewhere along the way, perhaps even that first day I took her home, I realized that I would embrace who she was — even if she was a girly-girl.

She was a tough girly-girl — something I thought of as an oxymoron before she came into my life. I worried less about her entering school than I did with her older brother. No one was going to walk all over her. She would never let that happen. I love that about her.

I love her love for bows and all-things-pink, too. If those are the things that make her happy, then they make me happy, too.

Her life won't always be that simple. But I admire that, for now, it's as simple as tiaras, hair accessories and the color pink. And I will always cherish these years and will remember the careful thought that she put into the selection and placement of her bows.

Few things. Very few things are more precious than the bow in her hair.

I protested pink with a note. She protested my protest by being herself.
Posted by Denise