One Long Wait, One Real Hip, One Dead Phone

I was doing so well. People were actually commenting on how much my stride had improved.

About two weekends ago, my husband and I decided to be kids again. We went to an amusement park —- all by ourselves! We rode roller coasters, shared ice cream, played games and won some stuffed animals for the kids, and we even dip-dyed candles just for kicks.

I knew going into our little excursion that I would be pushing my body to the limit, but I'd hoped that I would quickly recover.

But I didn't. So, after two weeks of limping that was getting progressively worse, I returned to the doctor to request another cortisone injection into my joint. My last injection had lasted months, and had great results. And I wanted my stride back.

It was a typical visit, except that my phone was dead and I quickly realized how much I would miss the distraction it provides in such a setting. In the main waiting area, I flipped through a few magazines that I was fairly uninterested in, occasionally glancing up at the national news, which played out scenes of flooding in New York. Out of the windows, I took notice of some tall, slender trees with only limbs at the very top, and for some reason, I wished I knew how to identify said trees.

"If I had my phone charged, I could probably look up what type of trees those are," I thought.

"Or perhaps I wouldn't have noticed the trees at all," my thought continued.

Eventually, my name was called for my next wait in the room. 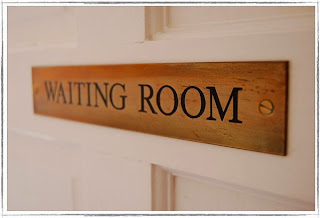 Once in the room, there were no magazines. No television. No other people. No windows. Just me, and my latest hip X-ray on a computer screen.

Of course I know my hip has been replaced, but each time I'm faced with it on screen, my thoughts lie somewhere in between impressed and utterly confused. I have one real hip, and one titanium hip. An actual piece of myself missing and replaced with a large piece of metal, a screw, and a round wire that, at one point, was holding together a crack created during my replacement surgery. There it is on the screen and there it lives in my body.

I was reminded of a recent X-ray I had for kidney stones where two nurses thought they pulled up the wrong X-ray.

"You're too young for a hip replacement," one nurse said.

She confirmed her understanding with an "Ah, Okay," as only nurses and medical professionals do, because no one else knows what the heck Avascular Necrosis is.

It was late in the afternoon as I continued to wait in the room, and the building was quiet enough for me to hear the doctor making his rounds. I could tell he was still a few rooms down the hall. This was going to be a long wait and I had no idea what time it was. Maybe it was better that way.

My eyes returned to the X-ray, and I briefly tried to make sense of how any of this even came to be, but decided to cut off that train of thought. With little options left, I decided to stare at the floor for a bit. I began visualizing the grains of the wood floor into images, the way people often do with clouds. In them, I found shapes reminiscent of teddy bears and "Mother Mary."

I checked my phone to see if it had miraculously received some power, but it hadn't. I rested my right elbow on the chair, plopped my head in the palm of my hand, and let my heavy eyelids lower to their rightful place.

A few moments later, the doctor walked in. We talked for a bit. He asked me to consider getting my right hip replaced. He said that the shots, while helpful, are only temporarily masking the problem. He said that when/if this next shot wears off, I should go ahead and schedule my next replacement.

I looked back to the computer screen at my one real hip. I could see that my hip joint was splotchy-looking and that the ball of my hip was not round, but somewhat ridgy, like a mountain top. Earlier, I was so focused on the replaced hip that I didn't take as much notice of the real one.

Just months prior, I thought my hip was on the mend. I was optimistic about having years, at least, left to go on it. But here I was again, trying to imagine any time this year when a having another replacement surgery would be convenient. Of course, no time came to mind.

I nodded along to his statements, realizing the truth in them, but every emotion inside of me just wanted to break out into a full on kicking-and-screaming tantrum right on the same spot of the floor where I had just envisioned teddy bears and "Mother Mary."

But on the outside, I just kept nodding.

After my shot, which involved a needle that appeared to be as long as my titanium hip, I was in route to my final wait area for a new X-ray. I caught a glimpse of a clock in the hallway and realized it was about 5:35 p.m. My appointment was scheduled for 3:30 p.m. I walked in and sat down with some relief to a television that was airing an episode of "House Hunters." Just as I grew annoyed at the woman on screen who grumbled over a kitchen backsplash that didn't suit her tastes, they called me back for the X-ray.

After no more waiting was left to be had, I exited the X-ray area to find no one at reception, no doctors, no nurses, no other patients. Just me, the X-ray technician who now held an image of my one real hip in her hands, and a custodian who was cleaning up after a full day of patients.

They let me drive home this time, which was different than the last time I received a joint injection. I wasn't sure why, but I didn't question it, and besides, no one was there to question anyways. Within an hour of getting home, my injected hip was in so much pain that it felt like I had a 200-pound leg hanging from my hip, ready to cut loose from the rest of my body. My temperature rose to 100 degrees, so I laid down to rest and hoped to wake up to something better.

By morning my temperature was gone, and my pain was barely there. I got out of bed to discover that I wasn't limping any more. The injection was doing it's job. This could last days, weeks, possibly months.

I'm going to give my thoughts some time to settle. With an upcoming trip to Disney World next month, I'm pretty certain the pain will return.

I'm also certain I'm not willing to let my circumstances stop me from having adventures and experiences with my young family. Again, I'm reminded that sitting and letting life pass me by is not, and may never be, my cup of tea.

For as long as the Lord gives me another day -- I've still got places to go, sights to see, memories to make.

Avascular Necrosis is an unruly condition that has taken the very framework that held me up and attempted to knock it down. But I am so very thankful that options exist to give me the quality of life that I desire.

I almost forgot what my days of waiting without a smart phone were like. It'd been a few years since I've gone through that process without shoving my face into a tiny, little screen that emerged from my purse. And I kind of liked being more present and observant in the shifting rotations of waits after all.

"Through him we have also obtained access by faith into this grace in which we stand, and we rejoice in hope of the glory of God. More than that, we rejoice in our sufferings, knowing that suffering produces endurance, and endurance produces character, and character produces hope, and hope does not put us to shame, because God’s love has been poured into our hearts through the Holy Spirit who has been given to us."
— Romans 5:2-5