It was a morning like any other ... well, except that some believed it was the end of world as we know it.

My alarm went off, soon followed by the sounds of my two youngest children, Chip Chip and Boogies, who are currently sharing a room. 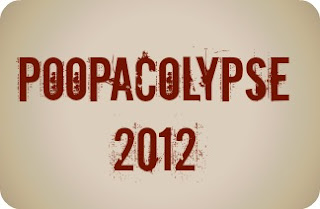 And then came, the first sign of the Poopacolypse.

Boogies started to cry out in a drastic manner, which was atypical since he usually wakes up in a sunny and somewhat perky mood.

I rose from the bed, unsure and a little scared about what I was going to find. It much worse than anything I could have imagined.

On the rails of his crib, all over his blankets, socks, and even on Pengy, his Dreamlite penguin pillow, which can only be washed by hand.

His older sister was standing by his bed, handing him baby wipes out of the container [Bless her heart]. It was a horrific sight.

It wasn't like he was intentionally spreading the poop, but the poop was ... let's say - a different texture, and it spread easily on its own.

I snapped into HAZMAT mode.

I went and grabbed two large trash bags: One for the items that couldn't be recovered [or were just too gross to attempt to recover], and another for the 'hopefuls' -- the items that had potential to pull through this mess.

In route to the kitchen, I hollered out to Big Boy, who was assuming his usual position on the couch with the laptop, with something along the lines of: "Get your face out of the computer screen, we've been overcome by poop."

To which he replied, "What poop?" ... never really losing focus on the computer.

I picked up Boogies and went straight for the tub, holding him out in front of me by at least a foot. I placed him in the tub before I even had a chance to run the water.

Within seconds, Boogies was back to himself, playing gleefully in the bath, while splashing as much water out of it as his possibly could.

The whole time, Chip Chip was standing next to me reverting back and forth from "Ewwww" to "Mommy, there's more poop over here."

After washing my hands to the bone and serving breakfast, I re-entered the battle zone for some final touch-ups.

With his mattress bare and the washer full, I sat down, letting out a small sigh of relief, realizing that we had survived Poopacolypse 2012.

R.I.P Pengy -- He was a cute and cuddly Dreamlite, who filled the night walls with colorful stars and moons. He was a great companion for the four weeks that he lasted in our home. We choose not to remember him as he left, but rather, how he was when he entered our lives. He will be missed.
11/2012-12/2012