He's growing up. My oldest son, who turns 12 tomorrow, is now a middle school student. 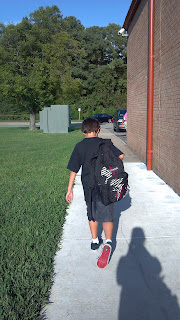 I don't know why his first day of middle school affected me so much, but I really shouldn't be surprised that it did.

Just seven short years ago, he was starting Kindergarten. He was just a tiny little guy with no clue about what school was or why he needed to attend. His book bag was half his weight and his shoes were always untied. He was shy. He asked a lot of questions.

On that first day, his teacher had to practically pry him off of my leg.

It was tough, but an education isn't something a parent can forfeit for their child just because it hurts too bad to let them go.

I thought that was going to be as difficult as it would get.

Being a parent has many arduous moments. From the moment I first held him in my arms at the young age of 21, I knew that my life had changed forever. Instantly, my sole purpose in life was to protect him, to love him, and to provide for him. But I knew that providing for him, meant that I couldn't hold him in my arms forever.

Providing for our children, includes an education. It means that each September, I'll send him down a crowded hallway into a sea of mostly strangers and some friends, and I'll help him to move up the grade ladder.

He'll have just as many years to go now, as he has completed. He's halfway through the gauntlet. And this year, more than ever, I find myself wanting time to stand still. I want the next seven years to go by much slower than the past seven years did.

Since there were many scheduling errors at his middle school orientation he, and many other students, weren't able to meet their teachers and see where their classes would be. So on the first day of sixth grade, the school invited parents to come with students until 15 minutes into their first period class.

As I sat in the filled auditorium with my son, I wondered if I should have let go earlier. Maybe I should have dropped him off. I'm confident that he would have figured it all out on his own. But I was there, and I wanted to be.

The school he goes to is for students from all over the city, so he was being introduced to completely new peers in a completely different environment. One of his friends from elementary school walked by and sat a few rows ahead of us.

"Of course I don't mind," I replied [and I actually meant it].

He grabbed his book bag [which was still half his weight] and moved to sit with his friend. I leaned forward just a bit to be nosy and noticed them sharing schedules.

It was in that exact moment that I started to tear up. My lip quivered a bit, because I was trying to "be cool" and hold back the tears. I took a deep breath and realized that I was being emotional, not because I was worried for my son, but because it was still so hard for me to let him go.

The Vice-principal asked the homeroom teachers to come to the front of the auditorium and call out the names of their students to be dismissed with them. Just as I pulled myself together, my son turned around to me and mouthed, "Don't leave yet."

Great, I had just gathered my composure and there he went, melting my heart all over again. I felt so loved in that moment, and all of my doubts about being there went away.

I fell in line behind his class with a few other parents and we walked down the hall. From quick conversations I had with the other parents, I knew that this was very difficult for them, too.

I sat in his class for a few minutes and then the students were excused to the hallway to try out their lockers for the first time. I explained the combination rotation to my son and he got it on his first try. When he opened it up, there was a NASA sticker inside and I took that as an encouraging sign from above.

He walked over to his friend that he was sitting with earlier, and helped him with his locker since he was having trouble opening it.

I watched with pride and smiled behind his back. The bell rang for parents to be dismissed and he quickly turned to me and said, "Bye Mom, I'll see you later," and he disappeared back into his classroom.

I walked back down the hall and out of the school with the rest of the parents. When I got to my car, I shed a tear again. This time, it was because I knew that he was going to thrive in his new environment.

I thought I was going with him, for him. But that was not the case. I was there with him, because I needed to be. I was still learning to let go. I imagine that might always be the case.

Even though he is almost as tall I am -- to me, he is still the sweet infant that I could scoop up, hold with one arm and stare at incessantly; and he is still that tiny little guy that was clinging to me on his first day of kindergarten. I can still look at him and imagine those points in time so clearly.

The difference is that, now, he knows why he goes to school; he knows how to tie his shoes; he knows so many answers to the questions he used to ask; and now he understands that I'm the one who has a hard time letting go.

By the grace of God [and some scheduling mistakes], I was able to be there -- to walk those halls with him on his first day of middle school.