I decided to create my will today. Not because I think I am going to die soon, but because it is something every parent should do.

I'd like to believe that I would live long enough to watch my children raise children of their own. I'd like to believe that I'd have enough time to do everything that I ever wanted to do here on Earth and that I said all the things that I needed to say to the people I love. Most of all, I'd like for every person that I love to experience all of that and more. But I've lived long enough to know that life and death doesn't always work out that way.

Death is not just a possibility, it's a certainty. Knowing that -- I try to live this life for the next, which I believe to be eternal life with God in Heaven. And like most people, I don't think of myself when I think about death ... I think about my family and my friends, especially my children. That is why I created a will.

Again, I'm not dying. But I have been hit hard by a fast lesson in declining health. Turns out, I'm actually not going to be healthy forever. (bummer)

Earlier this week, I was watching United Stats of America (Stats, not States). It is a really great show on the History Channel and the hosts (the Sklar brothers) are hilarious. I'd definitely recommend it. Each episode features a different set of statistics related to a specific topic.

One that I watched was about death. It's the most feared thing in the U.S., but the interesting part was the actual statistics about causes of death. They started by interviewing people about how they feared their own causes. The responses were all over the place: bacteria, meteorite, accident, insect bites.

I know this all sounds a bit morbid, but they deliver it in a very comical, non-morbid way on the show.

The bit they did on bacteria was pretty eye opening. They did some different experiments to demonstrate how quickly salmonella spreads throughout the kitchen after cooking chicken. They also showed the number of bacteria present on different household items. Surprisingly, the toilet was not #1. Actually, the kitchen sink typically has more bacteria on it than a toilet. The kitchen sponge was a major culprit.

But the top, most bacterialized (I just made that word up) item in a household is ... (drumroll, please)

They explained that everyone touches it and that most people don't clean it. The chances that there is poop (uh huh, poop) on your remote were almost 100 percent!!! I definitely got right up and grabbed a Clorox wipe and cleaned off every nook and cranny of our poopy remote.

I've always been a sucker for a good statistic. I don't always trust how accurate they are, but they pack a good punch. I like to use them in my writing to show how relevant (or irrelevant) something is.

When my doctor first told me about core decompression surgery, he explained that it had a 73 percent success rate. But when it comes to my left hip, I am in the 27th, less fortunate percentile. But as I've said before, it was worth a shot. I had to take a chance. I didn't want to jump right into a hip replacement if core decompression was going to do the trick. And for my right hip and right shoulder, it did.

On Thursday, I'll have a full hip replacement on my left hip. It is my fourth surgery in the past four months. I have to admit, I'm more nervous about this one than any of the others. This surgery has more potential for complications -- possible blood transfusion because of the amount of blood loss and possible infection or blood clotting after surgery.

The type of replacement I am having is called an Anterior Hip Replacement. It pretty much means that the surgery will be done from the front of my hip, instead of from the back. Below, you can see how this type of approach seems like the better option. 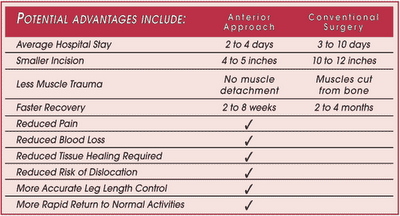 And of course I had to look up a few statistics. After a total hip replacement, 90 to 95 percent of patients achieve good to excellent results with relief of discomfort and significantly increased activity and mobility. And as for the possible complications I mentioned earlier, the chances are less than one percent. (phew)

Those statistics make me feel better.

The only other reason I am nervous about this surgery is because I have such high hopes for it. I honestly can't remember what it's like to just get up and walk normally and without pain. I want SO badly to be reminded of that. I do believe that this surgery will improve things ... but sometimes, doubt creeps in.

When it does, I pray about it and I feel better. I know that worrying is completely unproductive. I'm only human so I dodge it as best as I can.

Chances are ... that I will come out of surgery and be closer to better than I have been in 8 months.

The stats are in my favor. But more importantly, my family, friends and a healing God is on my side. With that type of support, there is really very little to worry about. Prayers (happy thoughts, positive vibes, whatever floats your personal faith boat) are sincerely appreciated.