Flu Vaccine or No Flu Vaccine? That is the Question.

"So far this season, more than 2,000 have died in the U.S. of flu-related complications, a number which has "pushed the illness past the 'epidemic' threshold." " [SOURCE: http://thestir.cafemom.com/healthy_living/149564/flu_epidemic_2013_what_you]

It definitely doesn't help that my husband and I recently watched "Survivors" on Netflix. It's about a group of people who survived a horrible epidemic, which started out much like the flu does each year. 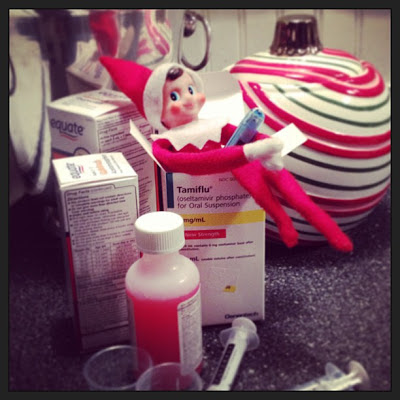 Unless you and your entire family can stay indoors and isolate yourselves from the rest of the world, you run the risk of getting the flu.

As a mom, I sometimes do get the urge to isolate my children. There is nothing worse than seeing your child sick or in pain. I have three children, and my youngest two are still in daycare. My children are constantly at risk of being exposed to infections and germs.

But I also believe they have built up stellar immune systems because of that.

This is the first year that my children did not receive the flu vaccine. Since my own run in with bad health, which caused some distrust in medical professionals and medicine in general, I've really started to question things.

Still, I wonder sometimes if I'm just being a bit paranoid.

My children do receive most other vaccinations. I try to space them out in case they have a reaction to any of them. My concern with the injected flu vaccine is that it is the only childhood vaccine that contains thimerosal, a mercury-based preservative.

Thimerosal came into the limelight when a physician in England claimed to have evidence showing a relationship between autism and a combination of childhood vaccines, which formerly contained thimerosal.

"While no studies showed a link between any harmful side effects and the thimerosal in vaccines, the American Academy of Pediatrics and the Public Health Service agencies decided to remove thimerosal from childhood vaccines in 1999." [SOURCE: http://www.everydayhealth.com/autism/vaccines-autism.aspx

But it still remains in the injected flu vaccine.

As far as the link between thimerosal and autism, I'm neither completely sold or shut off to the idea. While scientific evidence debunks the connection, I believe that there are always exceptions ... that in certain children or adults, their bodies will react a certain way to any sort of chemical that is put in their body.

"For Gary Weitzen, executive director of Parents of Autistic Children (POAC) in East Brick, N.J., the research doesn't explain why his son began showing the signs of autism almost immediately after his 18-month childhood vaccines.

Weitzen tells stories of how his happy, boisterous 18-month-old boy would play peek-a-boo with the little old ladies who sat behind them in church every Sunday. "He would just erupt in joyous laughter," he says of his son's exuberant personality.

One Friday, the happy little boy got his shots and immediately got sick. "He never played peek-a-boo again," says Weitzen."

It's a compelling case, and I have to say that I can relate. There isn't any medical professional who will outright tell me that Mirena is the cause of my disabilities, but I'm pretty convinced that it is -- especially because the bone deterioration began after having it inserted, and stopped after having it removed.

Doctors can develop theories, but they can't always explain causes in totality, because the human body is a complicated mix of processes. It's difficult to pinpoint causes in some cases. And unfortunately, no one knows the cause(s) of autism.

But to be clear, autism isn't my big concern with thimerosal.

According to Julia A. McMillan, MD, director of the pediatric residency program at Johns Hopkins Children's Center in Baltimore, there have been studies showing that methyl mercury, found in nature and even in many fish that we eat, can have harmful side effects resulting in intellectual and mental health problems. [SOURCE: http://www.everydayhealth.com/autism/vaccines-autism.aspx]

"A report published in the American Journal of Public Health, found that people who said they couldn't perform everyday tasks or engage in social and leisure activities because of a mental illness increased from 2 percent in 1999 to 2.7 percent in 2009. That increase amounts to nearly 2 million more people disabled by mental distress in the past decade, the report said." [SOURCE: http://abcnews.go.com/Health/reporting-mental-illness-rise-fewer-seek-treatment-study/story?id=14585730]

You really have to wonder, what's causing this increase in mental illness? I'm not saying flu vaccines are the cause, but I do have to question whether or not they could be a contributor. I think there are enough 'toxins' in plenty of other things that humans use and consume to help account for the rise in mental illness.

And yes, thimerosal is a toxin -- at least, according to Wikipedia it is.

"Thiomersal is very toxic by inhalation, ingestion, and in contact with skin (EC hazard symbol T+), with a danger of cumulative effects. It is also very toxic to aquatic organisms and may cause long-term adverse effects in aquatic environments (EC hazard symbol N).[10] In the body, it is metabolized or degraded to ethylmercury (C2H5Hg+) and thiosalicylate.[4]
Few studies of the toxicity of thiomersal in humans have been performed. Cases have been reported of severe poisoning by accidental exposure or attempted suicide, with some fatalities.[11] Animal experiments suggest that thiomersal rapidly dissociates to release ethylmercury after injection; that the disposition patterns of mercury are similar to those after exposure to equivalent doses of ethylmercury chloride; and that the central nervous system and the kidneys are targets, with lack of motor coordination being a common sign. Similar signs and symptoms have been observed in accidental human poisonings. The mechanisms of toxic action are unknown." [SOURCE: http://en.wikipedia.org/wiki/Thimerosal]

Here is a helpful article about requesting and ensuring a mercury-free injected flu vaccine, if it is in supply at your doctor's office: http://www.metrokids.com/MetroKids/January-2010/Should-You-Insist-on-a-Mercury-Free-Flu-Shot/

When the doctor's office opens back up tomorrow, I'm going to check with my pediatrician to see if they have mercury-free flu shots available. I might consider the injection without the mercury ... might.

The nasal flu vaccine, FluMist, does not contain thimerosal. However, it is not recommended for my youngest son, because he is under 2 years of age, and because he has a history of recurrent wheezing.

I could get the FluMist for my other two children, but I'm just not convinced that I should.

Unlike the flu shot, the nasal spray flu vaccine does contain live viruses. However, the CDC says that the viruses are attenuated (weakened) and cannot cause flu illness. But the listed side effects include runny nose, headache, wheezing, vomiting, muscle aches, and fever. So, I'm supposed to make my child ill for a vaccine that might not even prevent them from getting the flu?

Something about voluntarily giving my child a live virus does not sit well with me.

Also, I should probably mention that one of my three children has contracted the flu this season so far. We also had a quick, 24-hour stomach bug that went through our family, but it was not the flu. I also did not receive the flu shot this year.

Here is an interesting article that a co-worker shared, which explains the differences between the flu and other sicknesses that are floating around:
THE NO-NONSENSE, NON-ALARMIST, ESSENTIAL GUIDE TO THE FLU --
http://gokicker.com/2013/01/11/the-no-nonsense-non-alarmist-essential-guide-to-the-flu/ [Image credit: gokicker.com]

And below is a photo that I saw on Facebook of a manufacturer's label on a flu vaccine for adults [Source: http://www.facebook.com/photo.php?fbid=474144399315789]. The fine print reads: "There have been no controlled trials adequately demonstrating a decrease in influenza disease after vaccination with FLULAVAL." 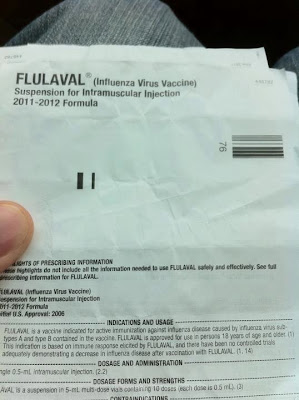