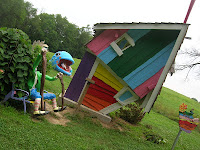 Yesterday, I returned to my orthopedic doctor for the first time since July. He mentioned a story about a crooked man who built a crooked house, and he said it reminded him of me.

We all laughed about it. I have to admit that now, since becoming "even" again after my left hip replacement, the laughing comes from a genuine place ... one that doesn't require me to laugh at an otherwise crappy situation.

X-rays on my hips revealed that my left hip, which is now made of titanium and ceramic, is doing well. My doctor said that when he saw it on the x-ray that he 'patted himself on the back.' And he should.

The right hip was as expected -- a little "iffy" at best.

He explained that there were no further signs of Avascular Necrosis. With that, came a HUGE sigh of relief. That meant that my hip wasn't getting any worse, and that my blood circulation had restored itself back to normal. My right hip was no longer deteoriating.

"But it's not a normal hip by any means," he said. "And eventually, you are going to need a replacement."

It wasn't horrible news, since I had already figured that much. I'm only hoping I can hold off on getting my right hip replaced for at least a few years. He suggested that - once it is to a point where the pain medication does not help, and it affects the quality of my life - to consider the replacement.

And I will. Because my left hip, which has already been replaced, is doing great. Had I not had it replaced - I'd still walk uneven with an aide and I wouldn't be able to do half of the things I am an able to do now.

The main thing I'll have to watch out for with my left hip is infection. Our immune system is unable to attack bacteria that live on implants, and these infections can become serious problems. If an infection of an implant goes untreated, the problem can worsen, and the bacteria can gain such a foothold that they can become a systemic problem.

Despite excellent antibiotics and preventative treatments, patients with a joint replacement infection often will require removal of the implanted joint in order to cure the infection. Fingers crossed that it will never happen!

My doctor explained that he can see where sclerosis (thickening or hardening of the bone) has occurred in the right hip. That meant that my bisphosphonate that I take each month is doing it's job. Still, the top of the hip is damaged. It's not near collapse, but it's not round like it should be. It actually looks "ridgy."

Then I asked my doctor: "Would now be a good time to tell you about my new problem?"

I could tell he was a little scared about what I was going to say next. I was, too.

For those who are not familiar with Avascular Necrosis (AVN), it typically affects bones and joints in a parallel manner - hence, my own AVN progression, my left hip, then right hip. My right shoulder, then my left.

At the end of the day, I can barely work them into a fist. It's been a problem since I write full-time. If I'm not typing, I'm clicking. I'm if I'm clicking, I'm writing. For any given event, I can easily take 5-6 pages of notes.

So I had more x-rays done on my hands. Thankfully, they came back clear.

It's possible that pain is a side effect of Sjogren's Syndrome, or the bisphosphonate that I take each month.

For now, I'm going to try a few "hollistic" approaches for my hands.

I despise medication, so I'm willing to give these things a shot:

If anyone has any other ideas for pain relief for my hands, please let me know.

I'm just so happy that my bones are still in tact.

And on that note, the final question I asked my doctor as he was walking out the door was, "So, no skiing this winter?"

"If you want to ski, you should," he replied.

I couldn't believe my ears. Now my husband and I could finally have our photos taken at the ski resort we got married at in 2008. Our wedding photographer screwed up all of our wedding photos and last year, we planned to have anniversary photos taken there, but that was cancelled because of my condition and pending surgeries.

I actually ended up having two surgeries on our 4th anniversary.

So, for our fifth anniversary, I think we'll finally head back to the mountains.

My doctor poked his head back in the door and said: "Don't stop livin'."

"I look to the mountains; where will my help come from? My help will come from the Lord, who made heaven and earth. He will not let you fall; your protector is always awake. The protector of Israel never dozes or sleeps. The Lord will guard you; he is by your side to protect you. The sun will not hurt you during the day, nor the moon during the night. The Lord will protect you from all danger; he will keep you safe. He will protect you as you come and go now and forever." -- Psalm 121