We went. We ran (but mostly walked). We conquered.

First, we arrived at the National Harbor, D.C., to the Gaylord National where we stayed the night before the Color Run. This hotel was simply amazing. We got a room with a balcony view over the atrium and there were birds flying around inside! There were stores and places to eat. We could have stayed there and had a fun time, but we went out and ventured around and it was a great little area to visit. My (12-year-old) son liked the hotel so much that he asked (at least 5 times) if we could live there. I can't blame him for asking. I didn't want to leave either. Here was the view from the balcony of our room: 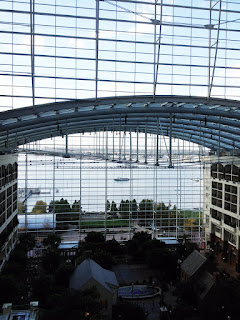 The night before the race, we got all of our Color Run gear ready. I had been waiting for this 5K for so long that I actually had trouble sleeping the night before. I felt like a little kid on Christmas eve. It was a pretty big deal for me. 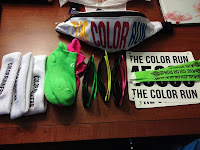 Just five months prior I was getting up from a wheelchair to walk on my own two feet for the first time in months. My left hip has felt strong ever since it was replaced. My right hip still worries me some, and I almost put off the Color Run because of it. I knew I could finish, but I was worried about the amount of pain I'd be in afterwards. It's hard to understand how anything physical becomes difficult until you've been sitting in a chair for four months -- your muscles get weak and you lose the stamina you once had. When I first started walking again, I'd get winded going from one side of the room to the other. There were times when I thought I'd never walk normal again, much less complete a 5K on even legs!

It's funny how I think now -- in terms of everything pre-operations vs. post-operations. Everything "post-operations" becomes a big deal. I constantly catch myself saying "I just did (insert activity here) for the first time since my surgeries."

Although I'd hoped I'd be able to walk/run a 5K, I wasn't real sure if it was possible. But it was, and I'm so glad I did it.

If you are considering doing a Color Run - do it! It is so much fun and an experience you will never forget. I am in pain now, but it's not as bad as it was yesterday, which is a good sign. We are thinking about traveling to a Glo Run next.

Here are some tips/thoughts for others considering doing a Color Run:

I could go on and on about what an AWESOME experience this was for me, but here's most of it in photos. Shout out to my friend, Maureen, who didn't know she was going to have to take a million photos of my family during and after the race!


I'm going to go strike this one off of my bucket list now :-)


UPDATE: On Dec. 28th I was surprised and absolutely honored that The Color Run recognized me as a 'Color Runner Hero of 2012.' What a perfect way to end the year on a positive and inspiring note! Thank you so much, Color Run! 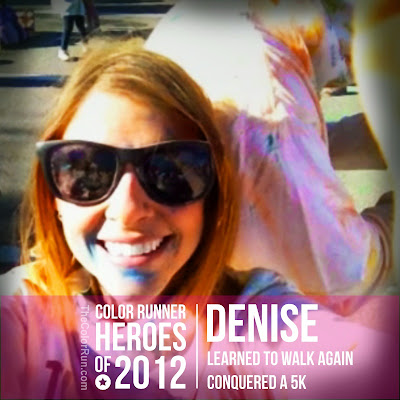 Here's a beautiful little girl named Pearl, who was also recognized by The Color Run. And she is MY hero!!! 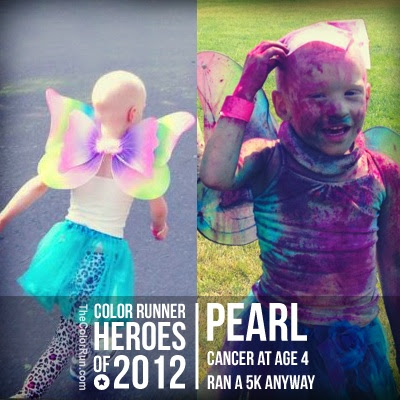 "Thou hast turned for me my mourning into dancing; Thou hast loosed my sackcloth and girded me with gladness; That [my] soul may sing praise to Thee, and not be silent. O LORD my God, I will give thanks to Thee forever." -- Psalm 30:11-12