I don't remember anything about core decompression surgery on my right shoulder and left hip last Wednesday, Feb. 1, 2012 -- except that I didn't have it until about 5 p.m. and I wasn't able to eat or drink anything since midnight the night before. I was scheduled for surgery at 2:30 p.m. I remember asking a nurse for a cheesy puff and telling my husband he had four eyes and six nostrils. They had me nice and sedated ... that's for sure.

I don't remember the exact moment I went under. I had expected to since I had surgery once before to remove a cyst from my ankle and I remembered it then. I was about 10 years old. At that age, the idea of surgery really scared me even though the surgery was a minor one. To comfort myself, I took my favorite stuffed animal, a Scottish Terrier named "Scottie." (original, I know) 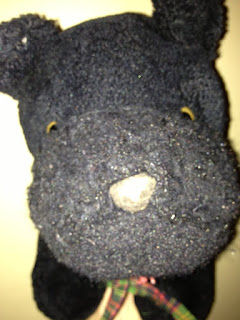 My dad brought Scottie back from Scotland when I was about 6 years old. Scottie was the greatest present I'd ever received in my short little lifetime.

Naturally, when I needed surgery a few years later, I wanted to take Scottie along. Scottie had since taken a beating. He had a small hole in his head where the stuffing was coming out. Still, he was good as new to me. The doctors and nurses allowed me to take Scottie into the operating room with me.

That was it. I remember getting to "7." I woke up and felt happy. Of course, the medication helped with that. The doctor came to my side and told me that Scottie had surgery with me. They had stitched up the hole in his head. Together, Scottie and I had survived surgery. That made Scottie even more special to me.

At 32, and with no shame, Scottie came along with me for surgery again. He wasn't allowed in the operating room. I guess stuffed animals are only for children (ho hum). But still, he was there, waiting with my husband, parents and parents-in-law.

I didn't remember a countdown. Maybe countdowns were just for children, too? I woke up in a recovery room. I knew it was late and I was the only patient there. I peeked my head up and around to see if anyone was there and finally, I spotted a nurse and she saw me. She came over and talked with me and I was happy to be back in the land of the awake.

I could barely talk, but I managed to ask her for some water and chapstick and she gave me both. I was in Heaven on Earth. I think I must have asked, "Do I get to see my husband now?" about 4 or 5 times. I bet that was annoying.

When I got to my hospital room, my mom and Scottie were there waiting as my husband walked along with me from downstairs. The nurse ordered me french fries, a grilled cheese and a soda. Yes, it was good to be back in the land of the awake.

The morning after surgery, my doctor showed me how badly my shoulder had deteriorated. He used a small camera to take pictures in my shoulder during surgery. I'm sure he'd expected some major damage after viewing my MRI. One image showed the "good" portion of my shoulder, the other showed the "bad." There was an obvious difference. Bone was missing from one ... huge pieces of bones missing. And the camera he used was pressing against the bone that was left and bending it in. Yes, bending my bone in. I had squishy bones. Weird and scary. But at least I was being fixed.

After the hospital, I had to adjust to being in a wheelchair at home. My equipment came late on the night before surgery and I had practiced getting around the house. I knew it was possible, but now I was being put to the actual test.

I think I've done well. I can hop into the bathroom on one leg, where the wheelchair doesn't fit. I'll scoot on the floor or hop up and down the stairs using the railing when I need to. The wheelchair is a breeze -- I push the left wheel with my left arm and use my right leg to move it where I need it to go. It's easier than it sounds.

The children have been more cooperative than I expected. My 2-year-old knows where my "boo-boos" are so she can avoid hitting them and she does a pretty good job. She calls my wheelchair a "whee-chair." My 11-month old doesn't seem to know the difference, but loves exploring my wheelchair. My 11-year-old is stepping up and helping out around the house and he enjoys pushing me around from place to place (even though he bumps me into the walls a lot).

God bless my husband for his support and care. And God bless my parents and parents-in-law for taking care of our children and me in the days following my surgery. No doubt they will continue to be invaluable during my recovery -- they always are. Friends and family have brought us dinners and we have been well-fed. Flowers have brightened up our home.

All in all -- I'm realizing I CAN do this. And I got two thumbs up at my post-op appointment today. Everything's gonna be alright.
Posted by Denise