If you are looking to read about a young boy named Atreyu who flies on a luckdragon to a magical land called Fantasia, I'm afraid you've come to the wrong place. I didn't mean to mislead anyone, but instead I'd like to offer my real-life neverending journey that starts with me racing through fields of tulips at the age of 32 and continues through to my current state of moving like an 80-year-old at the age of 34.

OK, so I never actually ran through a tulip field, but if I could go back, I certainly would. I promised an update on my ankle a couple of weeks ago. Better late than never? 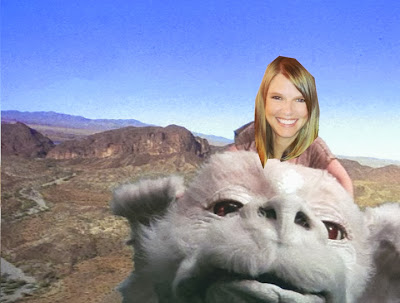 If I consider myself the main character of this story, there are a few things you should know about me in order for this post to play out properly. I have had four surgeries, including a hip replacement, which were a result of developing Avascular Necrosis (bone deterioritation due to a lack of blood supply) in my hips and right shoulder. I'm angry, because I believe that the Mirena IUD triggered my condition, yet there are no trials or studies to confirm nor deny that. I only have my experience and the bits and pieces of information gathered here on this blog. And then there's intuition, I have that, too.

This blog started as a way to chronicle my experience after being diagnosed, but it grew into mounds of online research that was too overwhelming to bear at times.

I recently returned to my doctor's office for X-rays on my ankle. The experience was all too familiar.

Take your clothes off and put this on.
Lie down on the table and try not to breathe for a few seconds.
Get dressed. Go back to the lobby and wait.

The doctor looked at my ankle X-rays and stated that he didn't think it was Avascular Necrosis. Instead, he said, it was likely the inevitable outcome of having really terrible bone structure in my ankles. I was born that way. I have no arches. And my feet and ankles are hideous. Always have been. If you have nice, normal feet — I envy you.

You'll need to see a foot and ankle specialist.
You might need to have your feet and ankles rebuilt.
But first ... my doctor said I should have another MRI to rule out Avascular Necrosis as the cause of ankle pain, which was causing me to limp [more than I already was] for weeks without any relief.

I was relieved to hear that he didn't think it was Avascular Necrosis, but nervous that it still needed to be 'ruled out.' If it was AVN, that meant that there was still a larger issue. It would mean that I was still clotting and the blood wasn't reaching my bone. The good thing about all of the damage that was done to my body, was that it was done. Instead of acquiring new damage, I was just repairing the old damage. I could handle that. Also, if it's not AVN in my ankle, that means that I have my first non-Mirena-related diagnosis in two years. In my twisted way of thinking, that's a victory. I really don't want to blame everything on an IUD. I promise.

So, I scheduled the MRI. And then the ankle pain stopped. That was odd.

I'm slow to update on this, because now I don't even want the MRI. I know I should 'rule it out' and get it over with, but my ankles doing OK now, so maybe I should just enjoy that while it lasts? If I get bad news, I'll feel compelled to act. But if I don't know, I don't have to do anything. On the other hand, if it is AVN, it will only get worse and I need to catch it early. Even if it isn't AVN, he'll want to refer me for a possible foot re-build. He was talking about rebuilding my ankle using bone from my foot. That sounds unpleasant. So, yep, I just decided. I'm putting this off for now.

I don't believe it is AVN in my ankle. If it was, I highly doubt the pain would have stopped, instead it would have worsened. Maybe I did something to my ankle and I just don't remember? On any given day, I dodge 30 hot wheels and 5 tiaras on my way out the front door. Or maybe my feet are just severely messed up and I'm just putting off a 're-build' until later, you know, until it's more convenient to have my ankles rebuilt [sense the sarcasm?].

Ahhhh. Ignorance is ... not really bliss.

Anywho — I'm still going back to see my doctor in 2 weeks because I also had X-rays done on my right hip and I can feel a second hip replacement growing closer each day. I'm limping. It takes me about 20 seconds to go from sitting to standing, either because of the pain or because my hip locks up or 'pops' when I do. And not the really cool lockin' and poppin' like those hip hop dancers do, but the really bad lockin' and poppin' where you're reminded that your very structure is falling apart each time you attempt to rise to your feet.

I want to take dance classes for the heck of it and run another 5K just because I can. I want to run through a field of tulips. None of those things are possible in my current condition.

It's not that I'm not living well — I am. I going and doing, but the limitations are killing me and the pain is annoying. As much as I try to tell myself things are fine the way they are, I still desire more. Maybe that's just greed, I'm not certain.

And so, for the main character of this post (me!), the conflict is within me. I just need to make another decision.

So, my story continues. And the questions constantly looming through it all is 'why?' Why did this happen to me and why have similar things have happened to other women who used Mirena IUD? And why doesn't anyone with the ability to do something about it, actually do something about it?

Where's my luckdragon when I need him? Perhaps he can take me to a magical land where companies manufacture things without any deception. And perhaps, I'll get a new set of magical hips and ankles while I'm there.

Not the end.
Posted by Denise