Mirena IUD Lawsuits: Why You May Not Have a Case

I've gone off the blogosphere for a bit. I just needed a break after I got the wind knocked out of me pretty hard [figuratively speaking].

After the Mirena IUD caused the Perfect Storm within my body, I thought long and hard about a potential lawsuit. I couldn't decide if that was the route I was going to take. I didn't know that it would be worth it in the end. I didn't want to put my life and my experience on the "stand" for others to judge.

More than a year [plus] after my health went from nearly perfect to absolutely scary, leaving me disabled and living with an autoimmune disease, I decided I'd go for it. I decided it was worth a shot. My initial lawyer seemed convinced I had a case. I had built up a good portion of it here on this blog. That lawyer discussed my case with another well-known lawyer from my area. The lawyer joked that I could call him if I ever needed a law office job. They, and others, referred to me as "Erin Brocovich."

But clearly, I didn't have the evidence as down-packed as she did.

The lawyer that I was referred to [because they were more familiar with cases regarding Mirena] reviewed my case. He seemed confident enough, but asked that I sit in on a call with another lawyer in his office who worked autoimmune-related lawsuits regarding breast implants [silicone in breast implants and silicone in Mirena are one in the same]. She concluded that, unfortunately, there was nothing I could do. 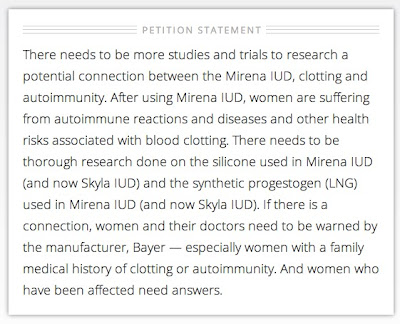 For days, those words repeated in my head.

"There was nothing I could do."

"There's no clinical trials to prove my case."

"There was nothing I could do."

I took the news as gracefully as I could and told her that I at least had peace with myself about the whole ordeal. I was confident that Mirena caused me to have Avascular Necrosis and Sjogren's Syndrome. The timeline alone, even minus all of the research I'd done, was telling enough. I told her that I understand that the court system was a complex system.

An unjust one in this case, I thought, but didn't say aloud. Though I'm sure she knew that all too well.

The backstory that she shared with me was interesting. Her firm previously represented thousands of women who had autoimmune effects from silicone breast implants. They did studies in their lab and felt confident that they had proof. The scientists witnessed and reported that the silicone had produced an autoimmune reaction.

In court, the judge said that their data could be biased. And he appointed his own panel of scientists to run tests. That panel found no relation. And the case was dismissed.

Hundreds of thousands of women with autoimmune reactions and it was all just a ... coincidence?

Potentially the same number of women who used Mirena IUD and were affected by the silicone in it, but that, too, is just a ... coincidence?

Wait ... so there doesn't seem to be a risk, but we aren't really sure? There is one, single study [that I can find] that specifically compares clotting from an LNG-releasing IUD (Mirena) with a Copper IUD. [SOURCE: http://clinicaltrials.gov/ct2/show/NCT00584610] The status of that trial is "unknown" and it appears it hasn't been updated since 2010, with no results to show.

Do you know what this means? There is not a single, completed clinical trial that shows the potential relationship between an LNG-releasing IUD and clotting. Not a single one.

Forget the FACT that I never had any autoimmune issues before using Mirena or that, now, I have been diagnosed with an autoimmune disease.

Where are the clinical trials or studies that research the potential [or in my mind probable] relationship between the silicone in Mirena and autoimmune response? Oh right, there isn't one!

And guess what that means -- that I, and possibly you, do not have a case regarding autoimmunity and clotting. For now. More importantly, it's not just about having a case. It's about getting answers. It's about peace of mind.

If you are affected by clotting or autoimmunity with either of these devices, as of now, you have no "proof" as far as a court of law is concerned. It didn't matter what my blood tests showed and how my body reacted specifically to the device. Though the proof seems evident, obvious even, in many cases, your case doesn't stand a chance without a solid amount of studies on these relationships. And those studies simply do not exist. If they do, I've been unable to find them.

This is why lawsuits against Mirena are focused on IUD perforation. A court of law cannot argue that the IUD migrated into a women's body and had to be surgically removed.

Unfortunately, I am not Erin Brocovich. I only wish I could be as thorough and had the time to go about town finding all of the answers. But I don't work for a lawyer. I have a full-time job. I have three children. I am in graduate school part-time.

My time is up to pursue my case in a court of law because of the statute of limitations, which says that I have only two years from the time of insertion to take legal action. That time has come and gone.

I've been used as "poster child" for adverse effects of "Mirena IUD." My story has shown up on lawsuit website's all over the internet. But the irony of it all is that the one lawyer who could have represented me, didn't. Too much money. Too much time. Not enough data. The outcome was too predictable.

If you believe you have suffered from autoimmune effects from the silicone in Mirena IUD, lawyers probably can't/won't represent you either. If you've suffered from blood clotting from the levongestrel (LNG) used in Mirena IUD, they probably can't/won't represent you. I'm not saying you shouldn't pursue a case or lawsuit. If your life was negatively affected without proper warning, you should do what is best for you. But I wanted you to know what you are going up against.

We need data. Not just about silicone. Not just about LNG. But specifically, the silicone and LNG used in Mirena and Skyla and if/how they relate to clotting and autoimmunity.

Now may not be our time. But I do believe our time will come. And I hope I have something to do with it.

Now the question playing over and over in my head is "What's next?"

Only time will tell, but we can start with this petition:
http://petitions.moveon.org/sign/mirena-iudskyla-iud-clotting

If you think that there needs to be more studies/trials about the potential connections of Mirena IUD and Skyla IUD to clotting and autoimmunity, please sign the petition and share it with your friends and family.

If you've stuck with me through this entire post, thank you. It's been a while. And I've had a lot on my mind.

Getting these answers is not about getting rich, or getting revenge. It's just about our right to know.
Posted by Denise